It’s late. He walks the lonely corridor
in this part of the Kremlin with his cat
hammocked in his arm. He stops before
the door of every commissariat
that’s still aglow and enters into each,
although he knows the commissars have gone.
Frugality is something he must teach:
he switches off the lights that they’ve left on.
He’s like the cat he strokes so tenderly;
both have strong preferences, but weak affections.
His true love is an ideology
of which both wife and mistress are reflections.
At last, he finds the final burning light
and turns it off, inviting in the night.

A single spark is all it took to seed
the fatal fronds and tendrils of the fire
that now insinuates itself to feed
on ancient wood of transept, nave, and spire—
the boards of fifty acres. Windows burst,
and stained glass falls like petals from a rose.
While firemen work to quench the inferno’s thirst,
a crowd awaits what tragedy will expose.
The blaze illumines soul as well as face:
one weeping woman on the street says she
is irreligious, skeptical of grace,
truth, providence, and even history.
Like ash, her sorrow drifts beneath the skies:
she knows not what is lost, nor why she cries.

Edward Hicks: An Indian Summer View of the Farm and Stock of James C. Cornell, 1848

Although it’s topographical, this scene
still seems ethereal, as if the horses,
sheep, cattle, pigs, and men were caught between
mundane things and the angels in their courses.
The livestock, loosed from stanchion and from stall,
crowd foreground in millennial expectation,
waiting serenely for the trump’s last call.
Behind them, farmers, rapt in conversation,
inhabit pastures green. Peripherally,
a ploughman drives his team, but stirs no dust;
fat haystacks fade into eternity;
and thin trees cling to leaves of gold and rust.
This painted world is too good to believe.
Perhaps that’s why the style is called naïve. 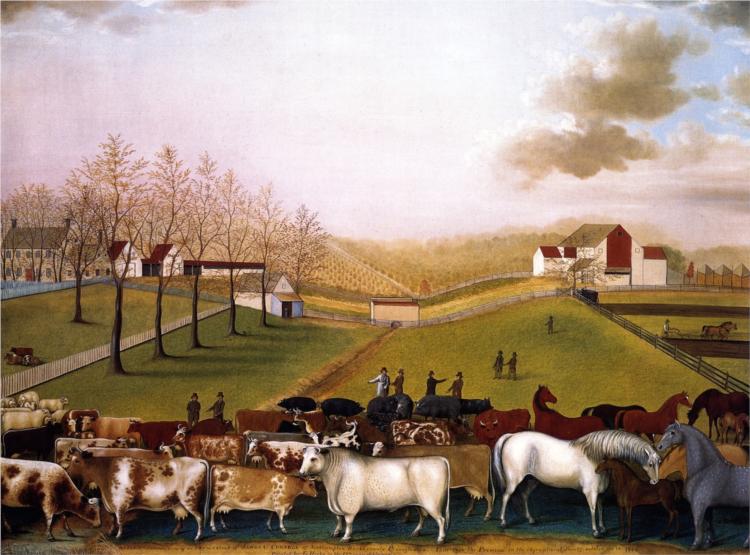 Duane Caylor is a physician in Dubuque, IA.  His poetry has appeared in a number of journals, including First Things, Measure, Slant, and Blue Unicorn.